You are here: Home1 / Press2 / Living in a confined space: London town house

Project: Bringing quality to life in the smallest of spaces – A London town house makes miraculous use of space in an intelligent conversion 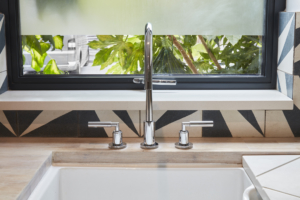 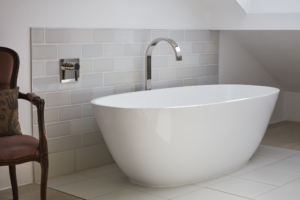 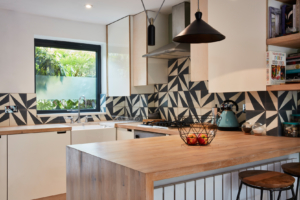 From dark and cramped to light and airy. The utlisation of space in an eighties town house in the fashionable London district of Shoreditch is nothing short of miraculous. Extensive alterations have given this three-storey house a large, open-plan dining and living area, as well as two bedrooms and two bathrooms fully furnished with Dornbracht fittings. Life here, in the smallest of spaces, is intelligently adapted to the reality of its urban environment.

The London town house is located in East London, not far from the historic Spittalfields, Brick Lane and Bethnal Green. With 77 square metres of floor space on a plot approximately 7.5 metres long and 3.5 metres wide, the house has a typically English brick frontage, two storeys and a small garden behind the house. Before the transformation, the narrow design of the town house felt small, dark and hemmed-in, but the conversion has made optimum use of the space and room layout on the ground floor and the other two storeys of the house.

After the renovation work, it feels light and open, bringing maximum comfort to a minimal space.

The home concept is shaped by vintage and designer furniture, adding to the cheerful, bright atmosphere of the interiors. Tara and MEM series fittings from Dornbracht enter into symbiosis with the mix of design styles inside the house.

Two cramped and gloomy reception rooms on the ground floor, covering an area of about 27 square metres, have become a space with an open-plan kitchen and a dining and lounge area. The integration of a patio door brings plenty of natural light to the narrow space and grants direct access to the lovingly designed garden.

Decorated in natural tones, the kitchen features a water point with a three-hole mixer from the Dornbracht Tara series of fittings. The minimalist design of the polished chrome fitting harmonises with the design language of the kitchen and balances with the strikingly patterned black-and-white backsplash.

An open space becomes a bathroom

An open space under the stairs on the first floor has been re-purposed to make optimum use of all areas in the house. A space that was formerly a cupboard has become a bathroom that can be used by the occupants of the second bedroom. An inside window that is frosted on both sides has been fitted by the staircase to allow daylight to enter the room.

The smaller bathroom is fully-furnished with a washstand, shower, WC and high-quality Dornbracht designer fittings. Integrated into the washstand is a wall-mounted mixer from Dornbracht’s MEM series. A Dornbracht rain shower brings the spa experience to a more modest space. The seemingly three-dimensional pattern of the bright backsplash makes the space feel even larger and more cheerful.

The second floor of the town house has been converted into another bedroom. The highlight of this room is the luxury, free-standing bath and MEM bath spout from Dornbracht, which are featured under the large and newly installed skylight. Another bathroom with a WC and washstand has been created in a separate area under the sloping roof. Here too, the owners have opted for the Dornbracht MEM series of fittings.

The owners’ conversion of the house shows how to make a go of living luxuriously in a smaller space. Dornbracht can offer very unique solutions – even within the challenging, architectural design of a town house.