You are here: Home1 / Press2 / Timeless design update with Dornbracht fittings: a loft conversion in ...

The conversion of a multi-storey loft apartment in the fashionable Zürich district of Sulzer-Escher-Wyss by Huggenbergerfries manages an ambitious balancing act between old and new, past and future. But first and foremost – and this is also thanks to Dornbracht’s timeless design strategy – the project is a role model. It shows that it is possible to combine sustainability and design standards. 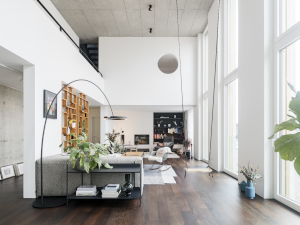 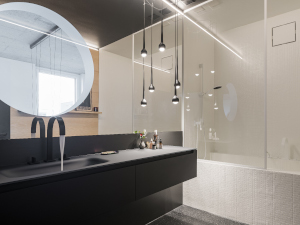 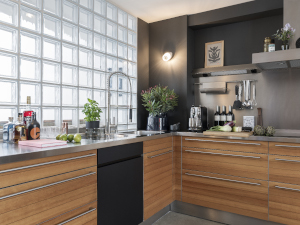 The city of Zürich is known for respecting what it already has and handling it with care – in this case, revitalising a former industrial area to create a vibrant neighbourhood. Ortner & Ortner’s “Schiffbau” project for the former boiler shop includes not only a re-purposing concept for the old factory building, but also sets a good example of how to expand an area with sensitivity. The existing building is augmented by newly constructed workshops, rehearsal stages and offices for the Zürich theatre, which also makes it possible to integrate three residential floors in the centre of the complex. Historic and contemporary components are interwoven into a new city block.

Minor intervention, major impact
The maisonette transformed by Huggenbergerfries is part of the “Schiffbau” complex. The conversion was shaped by two premises: the sustainable handling of resources and the desire to preserve and display the refinements of the existing building. Abstraction and precision were called for to manage the balancing act between preserving the architectural substance and passing on the history. In the two-storey living room, the most substantial structural interventions involved uncovering the exposed concrete ceiling and the distinctive steel girders that allude to the industrial charm of the area. Two porthole-shaped openings were also integrated into the top floor, in memory of the ships that used to be produced on the site. These new visual links allow dialogue between the rooms, including an element of surprise. One of the portholes connects the large bathroom with the living room, and gives the observer unexpected views and outlooks at a place where a mirror usually hangs.

Longevity as a concept
The “black & white” theme is already evident on the staircase that winds its way up through the three storeys. This is extended through the entire loft apartment, and is particularly effective in the bathrooms. The existing clear design language of the main bathroom has been adapted slightly and exaggerated by a simple yet effective trick. The colourful mosaic tiles of former times have been painted white, making the room the perfect backdrop for using Dornbracht fittings. Preservation was also a factor for the installations. The existing concealed products from the year 2000 remained unchanged, and were merely provided with new fittings. As this also works across design lines, the MEM fitting, with its basic aesthetic appeal, is now installed on the former concealed structural element of the archetypal Tara.

Abstract for impact
Just as the ground floor is turned over to theatre use, so the functional bathroom space becomes a dramatically presented stage. In keeping with the “black & white” concept, a Matt Black MEM fitting puts the spotlight on the grey-black washstand, while a Matt White MEM interacts elegantly with the bath. The clear design language of the fittings’ series, which was created by Sieger Design, takes a back seat in terms of form, its flowing silhouette directing the gaze to the most original form of water presentation. This impression is reinforced by the precise differentiation between the grey-black furniture and the white areas, accentuated by the lighting.

The concept is also continued in the second bathroom. The newly integrated Matt Black Dornbracht Rain Shower takes full effect against the backdrop of the abstract, white room. The guest bathroom also follows the maxim of creating new worlds with minimal effort. In each case, the background is the stage for dialogue between the fittings. Matt Black Meta is used here, framed by dark grey in the shower and by white tiles on the washstand. Other Dornbracht accessories fit seamlessly into the concept, making the entire room seem like a unified whole.

There is a Dornbracht fitting in the kitchen, as well. The new Tara Ultra kitchen fitting takes up the concept of expansion in perfect harmony with the existing Bulthaup kitchen. The Platinum Matt Profi single-lever mixer represents the newcomer, while the appearance of the glass blocks is reminiscent of the industrial character of the surrounding architecture.

The conversion is a good example of how sustainability, in the sense of saving resources, can be implemented: not only by well-thought-out design, but also by the modularity of collections that are only made possible by long-term design strategies.

Focus on outstanding architecture: For the third t

The Building of the Year Awards is one of the most

Architectonic excellence and progressive designs a

The balance of high-quality finishes with a pleasa

Brutalism with a French touch: a home conversion i

The historic Palmaille in Hamburg is particularly

We could say: told you so...⁠ ⁠ But instead we

A sanctuary of luxury and comfort⁠ ⁠ How to de