Available for delivery: mechanical variant as of April 2018, electronic variant on request as of 2019

Attention US media:
Please use only the version intended for your market, as product name and features differ from the European version. 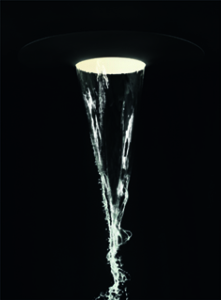 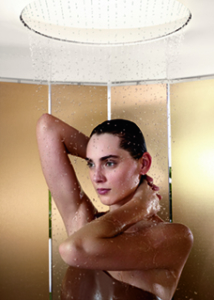 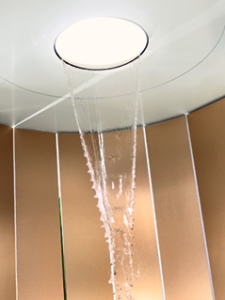 Iserlohn/Milan, April 2018
Water, light, energy – Aquamoon represents a new dimension of a highly-individual shower experience. The spa application embodies the next level in the Dornbracht LifeSpa and permits a unique encounter with the element of water: four newly-developed flow modes and fascinating lighting scenarios are combined to form an emotional water experience capable of boosting a new level of joie de vivre. After presenting Aquamoon as a concept study within the framework of the ISH in 2017, Dornbracht is presenting the production-ready application for the first time at this year’s Salone del Mobile in Milan.

Aquamoon is distinguished by its particularly minimalist design, attributing focus to the unique water experience. A dome in the ceiling forms the central element which is seamlessly integrated in its surroundings and practically merges invisibly with the bathroom or spa interior. The dome offers a particularly deep-view effect: by means of a concealed light strip inside the semi-sphere, Aquamoon creates the perfect mood lighting while generating a feeling of infiniteness when gazing upwards. The unique water experience is created by four innovative flow modes.

Queen’s Collar. Lifts the burdens of everyday life from your shoulders.
Queen’s Collar is a semi-circular cascade of water which is reminiscent of a waterfall as a natural experience. The flow mode massages the head, shoulder and spinal area, thereby achieving a soothing and relaxing or invigorating and refreshing effect, depending on the water pressure and temperature. The intensity of the cascade also varies depending on the respective part of the body: in the middle, where the cascade primarily makes contact with the head and forehead, it is gossamer, gentle and downright sensuous, while it has a powerful and vitalising effect from the side.

Embrace. A feeling of security.
As its name suggests, Embrace envelopes the body in water – but the head stays dry. This gives rise to a high-intensity experience of security, during which everyday routines can be forgotten and breathing concentrated on, focussing on the self. Distraction gives way to centering, stress yields to deep relaxation. Looking upwards into the seemingly infinite dome can intensify the experience even further. Here, too, the intensity of the cascade also varies depending on the respective part of the body:

Aqua Circle. Adapts to any requirement.
The effect of Aqua Circle is regulated by the volume of water. Like a gentle funnel, the water falls from the dome. The more water, the smaller the funnel effect, thus giving rise to a powerful and bundled flow which is ideal for washing skin and hair, for example. When less water is applied, the funnel enlarges, staying clear of the head, and the water falls like a rain curtain, quietly and consistently, onto shoulders. Accordingly, Aqua Circle has a relaxing and meditative effect.

Tempest. The nature of water.
With its large and particularly soft droplets which fall seemingly effortlessly and autonomously aided by gravity, the Tempest flow mode introduces the natural experience of a tempestuous rain shower to the bathroom. The flow mode does not follow any logic, but rather the natural inclination of the water. A thundery shower coming from every direction, clearing the air while simultaneously ensuring relaxation and refreshment.

Rainmoon
With its Aqua Circle and Tempest flow modes as well as the integrated light function, Rainmoon offers a unique rain experience. The flow modes and hand shower fitting are controlled mechanically via the concealed thermostat with three-function volume control. Thanks to its reduced flow rates, Rainmoon can also be specified in the USA. Rainmoon can be ordered with immediate effect and will be available for delivery as of August 2018.

Aquamoon
Apart from the Aqua Circle and Tempest flow modes, Aquamoon also has a third flow mode – Queen’s Collar – and an integrated light function. Using the xTool operating element, all the flow modes can be combined as desired, thereby creating an adaptable and individual water experience. Aquamoon can be ordered with immediate effect and will be available for specification and delivery as of August 2018.

Aquamoon ATT
Aquamoon ATT represents the ultimate product concept in its capacity as an electronic variant. It avails of each of the three flow modes, Aqua Circle, Tempest and Queen’s Collar, as well as various coloured light scenarios and specially-developed, pre-set applications or so-called Signature Treatments. A fragrance component will also be integrated within the Signature Treatments. As an option, Aquamoon ATT can be ordered as a variant with Embrace as a fourth flow mode. Control is via Dornbracht Smart Tools. AquamoonATT will be available on request as of 2019.

Aquamoon represents the next level of the Dornbracht LifeSpa.
Aquamoon picks up on the concept of experience of the Dornbracht LifeSpa and brings it to the next level of the mega health trend. The effect of water on the body is extended to include a psychological and spiritual experience. Aquamoon is the epitome of bliss giving rise to emotions such as relaxation, refreshment or security by combining water and light. Andreas Dornbracht, Managing Partner at Dornbracht: “Aquamoon is our response to the growing desire for balance and joie de vivre. After all, in times of acceleration marked by digital transformation and radical change, there is an increase in everyday demands on people. With this in mind, maintaining personal health is increasingly important – both physically and psychologically. And the bathroom offers space for developing a personal health strategy.”

Dornbracht LifeSpa
Within the framework of the “Health, Solutions, Architecture” range, Dornbracht LifeSpa reveals a variety of possibilities for integrated health-promoting water applications in the bathroom or spa.

Health: In the form of LifeSpa, Dornbracht – in co-operation with experts – offers information and inspiration for an individual health strategy. Treatments such as affusions, contrast showers, relaxing baths or water massages augment an individual’s personal health strategy and in the long term, make a relevant contribution to improving well-being and boosting life-force energy.

Architecture: Dornbracht offers consulting when planning spas and supports its customers in designing a wellness area which complies with their individual requirements and the best way of integrating it in existing bathrooms.