You are here: Home1 / Reference2 / Residential Building on Palmaille 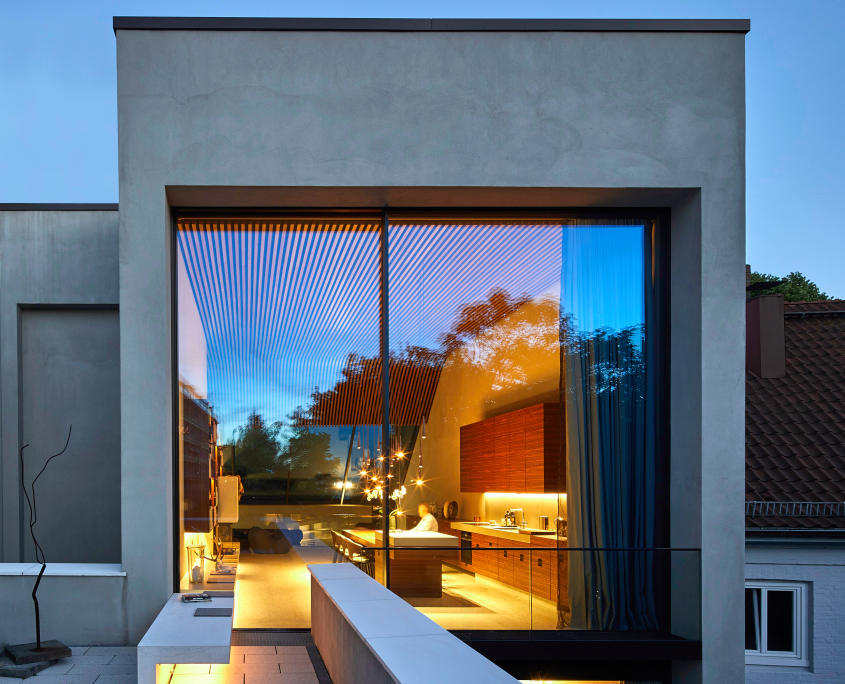 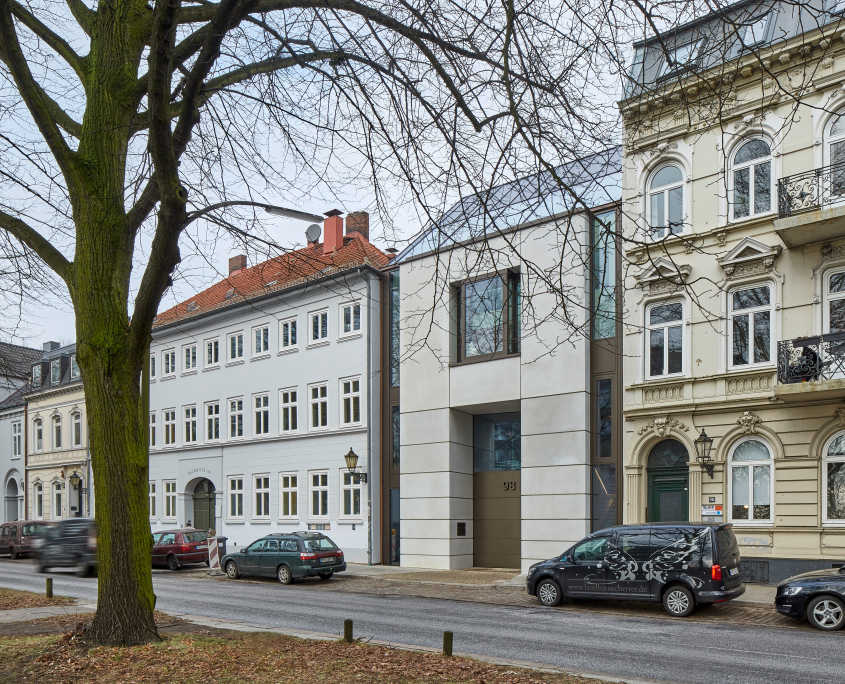 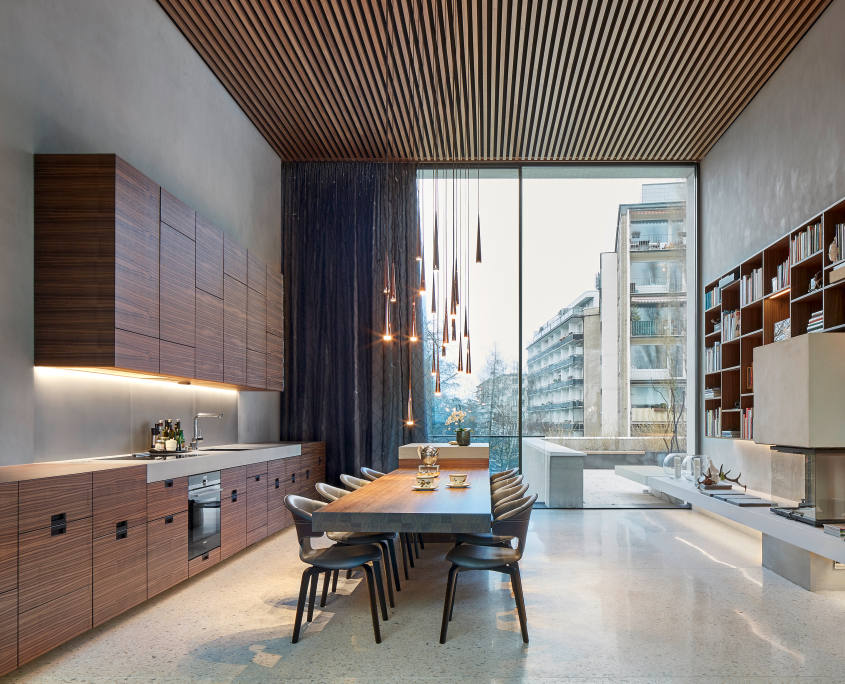 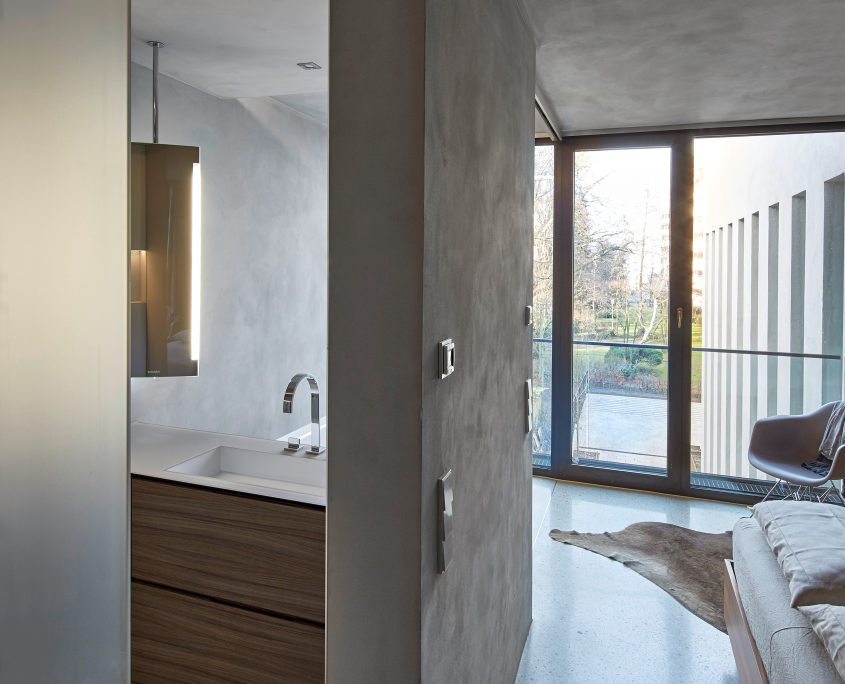 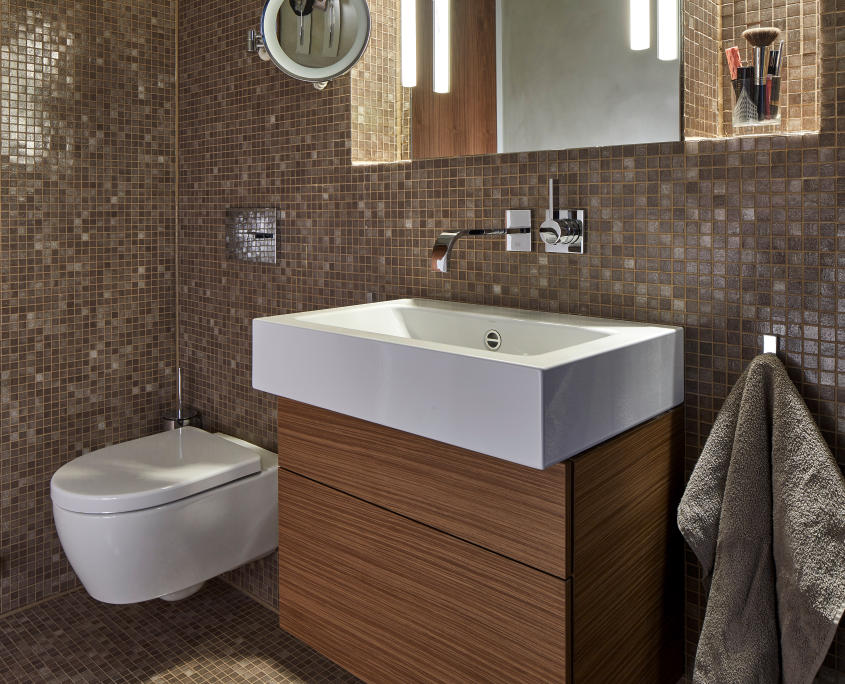 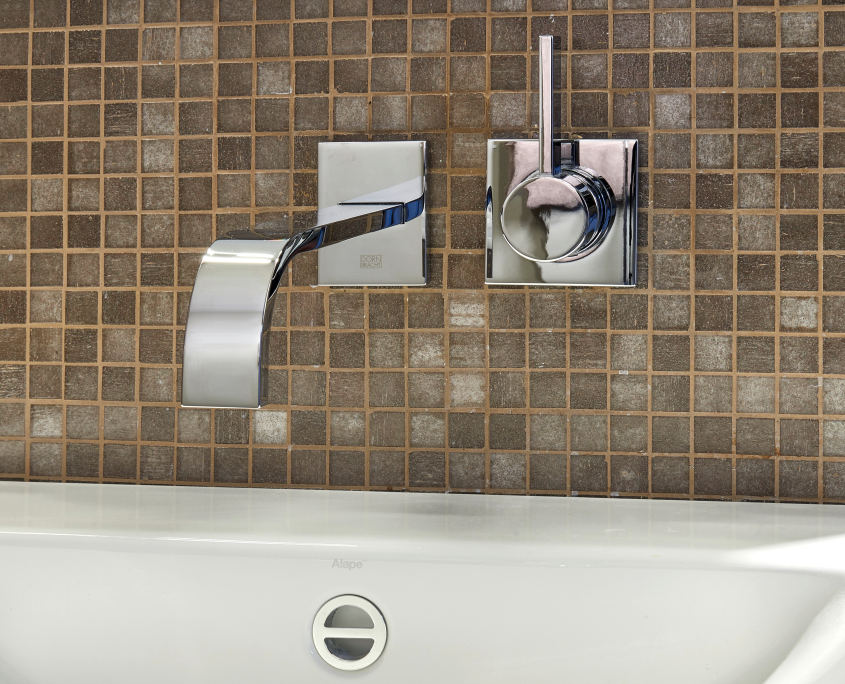 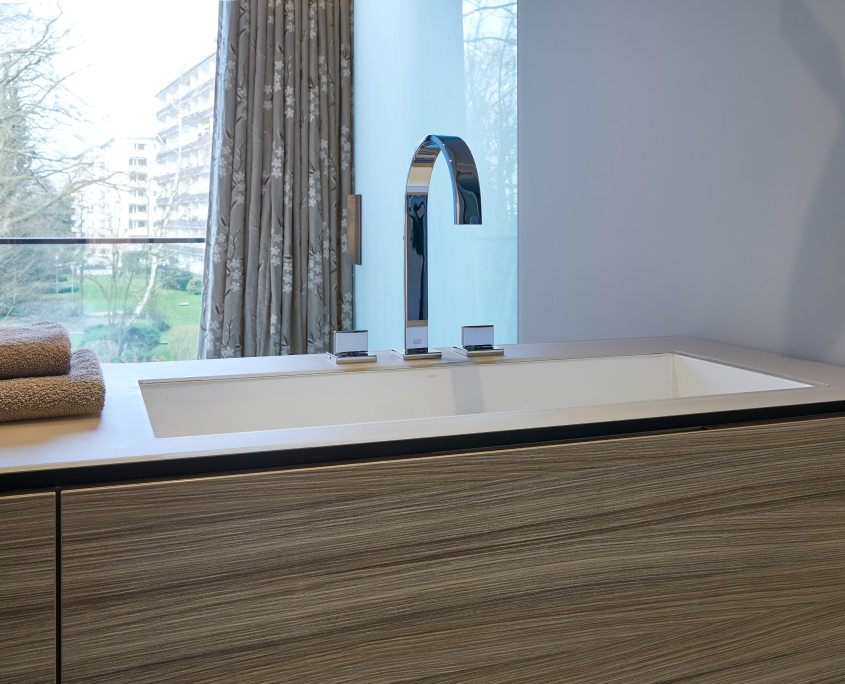 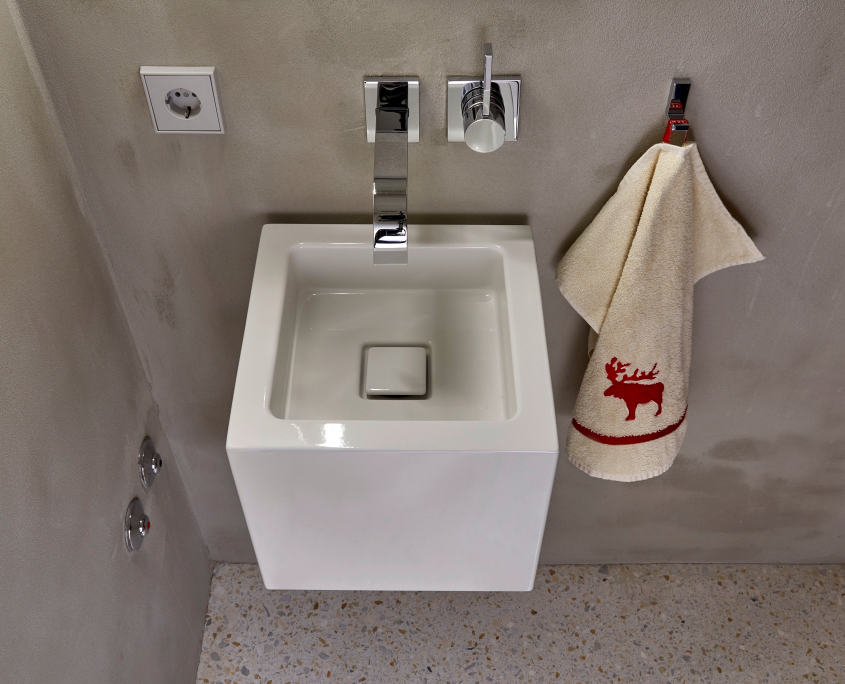 ​A successful re-interpretation based on a historic model

The residential building on Palmaille, one of the oldest boulevards in Hamburg, is unique in many respects. Different yet familiar, the new house on its mere ten-metre-wide sloping plot fits perfectly among splendid town houses from the period of rapid industrial expansion and modern business premises. The Palmaille in Hamburg is a street with a history. Laid out as a spacious avenue at the end of the nineteenth century, the wide street is characterised by the classically designed façades of Danish architect Christian Frederik Hansen (C.F. Hansen), whose simple yet prestigious architectural style still sets a distinctive tone. The classically symmetrical tripartite division of the façades, the unity of interiors and envelopes, in short, the coherence of form, function and volume, have shaped the image of the Palmaille over the years. The same applies to the elevated view from the boulevard onto passing ships and the Port of Hamburg. The street is heritage-protected as an ensemble, to ensure that this is preserved for the future. Although monument protection regulations require adherence to design language, materials, scale and colouring, they do allow a contemporary re-interpretation of the essential features of the historic environment into a modern architectural language.

Hamburg-based architect Walter Gebhardt’s model for his brave re-interpretation of the historic inheritance is C.F.Hansen’s “single-window house” from the year 1803. The private residence of the influential Danish architect, whose classical style shaped the architecture of Northern Europe, is not far away from the new building, also in Palmaille. The tasteful, monolithic new building, complete with its articulate details, takes its rightful place here in the true meaning of Hanseatic noblesse. Like its historic model, the enclosed structure of the building is picked out by glazed gaps. An oversized entrance portal and a large display window form the interface between the interior and the exterior spaces. The incorporation of horizontal zoning in the basement, main floor and attic was also taken from the reference. The specification for a gabled roof was abstracted and transformed into a large glass area, seamlessly merging into the actual roof and invisible from the street. Innumerable variations of the façade were submitted, before historical heritage and the approving authorities were convinced by the right mix of detail and re-interpretation of materials and colouring.

Its position on the busy connecting road between the villas on the Elbchaussee and the Hamburg district of Altona made it necessary to pay close attention to the arrangement of the spaces. The ground floor was used as a transit area, from which the parking spaces and the central staircase can be reached by lift. Rented office space on the first floor makes the transition between the roadside and home environments. The arrangement of rooms in the upper storeys gave priority to creating optimum spaces for the client’s specific lifestyle ideas. Therefore, the focal point of the second floor is a living space on two storeys, with a generous “single window” that not only gives a view over the River Elbe, it can also be used as an item of furniture. The rear part of the building develops along the firewall to the adjacent buildings and includes a complete guest apartment with two bedrooms, a kitchenette and a shared bathroom. The sleeping area of the main dwelling is also on this floor. The five-metre high living zone with kitchen and dining zone are in the attic. The interior space extends smoothly outwards into a spacious roof-top terrace. Clever nesting of the areas of activity ensures that efficient and full use is made of the limited space, whilst still allowing room qualities in the lounge areas. The choice of materials and the quality of execution contribute to the effect. Concrete for the façade, an individual sand-coloured terrazzo-mix for the floors and circulation routes, an untreated fine plaster facing on the walls and ceiling and walnut wood for the various built-in units and the doors. The precise execution of the acoustically effective slatted wooden ceiling in the attic space is particularly impressive, with slats which twist as they follow the geometry of the volume.

One of the biggest challenges in the interior space concept was to plan a bathroom that is merely 1.5 metres wide. Instead of lining up the elements according to functionality, interior designer Nicola Stammer used a clever trick: the space was divided into zones, the most-frequented “main bathroom” zone with shower and washstand and the “resting bathroom” zone with the bathtub directly in front of the window façade. The spaces are separated by the sideways positioning of an item of bathroom furniture, a customised special production from Alape. with an undermount basin, from Alape as well. Precision work was also required here, to sound out enough room for the bed with passageway and the necessary wall area for the sliding elements. A creative solution had to be found for the side tracks of the drawer elements, as well as for special requests for towel bars on the drawer or for a suspended rotating mirror. The resultant zoning of the space ensures a clear view of greenery from every position and the integration of floor-to-ceiling, all-glass sliding doors offers openness or intimacy – depending on the make-up of the day. There are no cables and no unnecessary switches to disrupt the reduced impression. This is not only thanks to the technology integrated in the fitted furniture, but also to detailed planning. Like the architecture of the house, Dornbracht’s MEM series of fittings continues the back to basics theme, showing the perfect symbiosis between products and design variety. The guest bathroom is accessible from two sides and includes on its walls and floor a glass mosaic that focuses on wood colours. The room is also visually expanded by an OpenSpace shower. There is storage space in the washstand drawers and on the open shelves, in keeping with the design concept of the entire building.

“Spaces do not have to be large to have an impact and create a stunning impression”, confirms Nicola Stammer, and continues: “The clever division of the bathroom into different usable areas and the well thought out planning of the details make size less important. Using Alape products in combination with Dornbracht fittings satisfies the desire for a Hanseatic sense of style in an urban home environment.”

Focus on outstanding architecture: For the third t

The Building of the Year Awards is one of the most

Architectonic excellence and progressive designs a

The balance of high-quality finishes with a pleasa

Brutalism with a French touch: a home conversion i

The historic Palmaille in Hamburg is particularly

We could say: told you so...⁠ ⁠ But instead we

A sanctuary of luxury and comfort⁠ ⁠ How to de