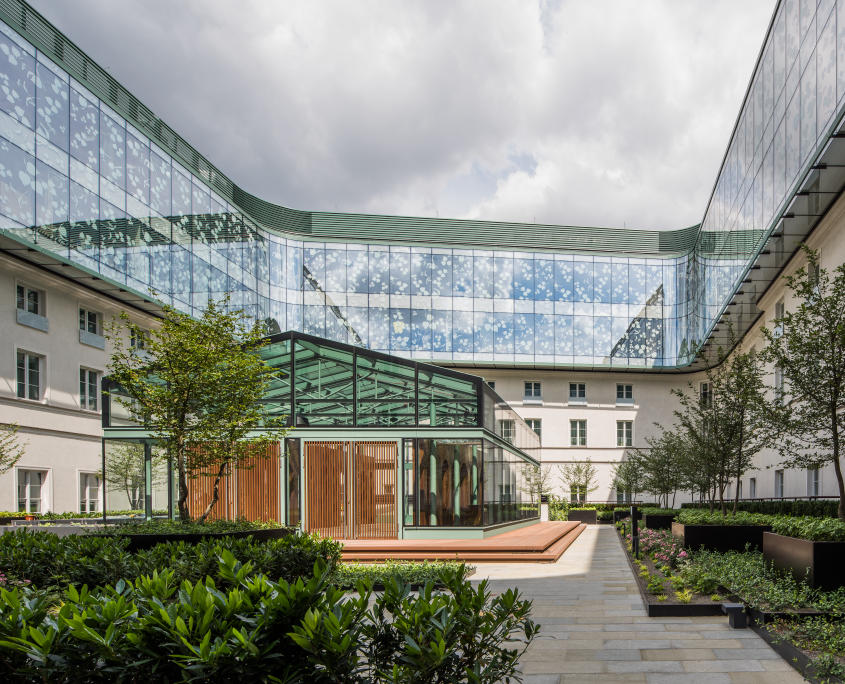 Built in Warsaw in 1857 at Royal Route (Trakt Królewski), the most important Warsaw artery, the Hotel Europejski was regarded as one of the most representative and elegant hotels of its day. Some 160 years later, the historically important building has been painstakingly restored in close cooperation with the office of Metropolitan and Provincial Conservator of Monuments. The historic Neo-Renaissance façade has been renovated and new elements have been added to the building – among them an office and boutiques. The rooms have been upgraded to the latest modern standards and the elegant bathrooms have been furnished with premium fittings from Dornbracht.

The Europejski is located at the heart of Warsaw right next to the Royal Route (Trakt Królewski), one of the longest representative streets in the world. With its Neo-Renaissance-style façade, the five-star hotel fits elegantly into a street scene that is lined with palaces, churches and monuments and the most important institutions in Poland. It is not far from the Polish National Opera Teatr Wielki, the Presidential Palace and the Potocki Palace (headquarters of The Ministry of Culture and National Heritage), and Zachęta, the National Gallery of Art or Warsaw University and Academy of Fine Arts.

After its painstaking renovation, Europejski provides a link to glorious days gone by, while still representing elegance: its 106 modern rooms and suites were mainly devised by Boris Kudlička with WWAA. Guests at the Europejski dine in exclusive restaurants, like Europejski Grill, bars and cafés and a famous longbar. They are pampered in the hotel’s own spa and wellness area, or visit the luxury boutiques on the ground floor of the hotel. The interior of the Europejski is also home to various contemporary artworks, most of which are on display and accessible to the public. The Raffles Europejski hotel therefore has the largest private art collection in Poland.

When you spend the night at the Raffles Europejski Warshaw, you are surrounded by elegance. The hotel bathrooms are fully tiled in grey marble mosaic which shows Warshaw’s skyline with its most characteristic buildings. The polished chrome or champagne of the Dornbracht CL.1, Tara.Logic, Tara and MEM series fittings installed here either form a harmonious symbiosis with the stone-coloured surfaces or create a striking highlight.

Dornbracht’s CL.1 series is installed in most bathrooms as well as in the spa and pool area of the hotel Raffles Europejski Warshaw. The tapered, upward-reaching spout and the precise gap width between the base and the body of the fitting are typical of CL.1. The relief-textured handles give the fitting a particularly striking appearance and feel.

The bathroom design is rounded off by matching Dornbracht CL.1 series spray sets, rain showers and accessories such as towel bars or hooks. Dornbracht has crafted matching door handles for the luxury shower cubicles at the Europejski. Installation was done at the special request, thanks to the Dornbracht

Also installed in some of the bathrooms are the Dornbracht MEM and Tara series (on washstands and in the shower) and the Tara.Logic series (on baths and washstands). The free-standing Tara.Logic single lever bath mixer can be found in a total of 44 bathrooms throughout the hotel. The slender and reduced design of the fitting is captivating, as it stretches elegantly upwards.

All the Dornbracht products installed here are remarkable for their long-lasting aesthetic appeal, which comes from the balance, harmony and precision of their design. The fittings blend into the modern interior design concept of this traditional hotel and their appeal will endure, unlike fleeting trends.

In selected rooms and in the pool area the white Alape A˘form basins are fitted. They are elegantly unobtrusive and fit harmoniously into the overall impression. They are remarkable for their clear and puristic design language, outstanding quality and precise workmanship. The three-millimetre thick, delicate steel core of the basin provides stability. Their homogeneous glazed surface makes them tough and gives the basins a pleasing sparkle.

The Europejski through the ages

The Europejski mirrors and witnesses historical events, ground-breaking inventions and social upheavals. When it opened in 1857, the hotel that Henryk Marconi built was regarded as the most luxurious hotel in Europe. From 1878, the Europejski had more than 240 rooms, a cake shop, billiard rooms, a reading room and a banqueting hall, the Pompeiian Room.

Extensive conversion and modernisation work followed in 1907: electric lifts, telephone booths, new soundproof doors were integrated. New bathrooms were also added to the rooms, which was up to then unprecedented solution not only in Warsaw but in Poland.

During the Second World War, the building suffered serious damage as a result of War air-raids. In 1945, the rightful owners have begun the reconstruction of the building, in range that was possible during the difficult post-war times. The Europejski was re-opened in 1962. Its guests included Marlene Dietrich, Robert Kennedy and family, and The Rolling Stones.

A further phase of renovation and refurbishment began in 2013 and ended when the hotel re-opened in June 2018. Now the hotel is part of the Raffles Hotels & Resorts luxury hotel chain.