New worlds and experiences beyond reality: Virtual and Augmented Reality are two of the central technology trends today. There is great potential in these technologies for many different things, and the experience of water is also one of them, as Dornbracht demonstrated at Fuorisalone 2019. Under the title “Is Memory Data?”, the premium fittings manufacturer presented a new, experimental concept during the Milan Design Week: the Dornbracht Research Lab. The project will be shown again at the Design Biennale Zurich.
With its first Research Lab, Dornbracht has embarked on a new, forward-looking path for product and brand development. “In times of ever shorter development cycles, we have to work on topics iteratively and across disciplines,” explains managing partner Andreas Dornbracht. “The Research Lab enables us to consciously experiment without fixed expectations concerning the results, and discover new questions to be answered from our observations.”
The concept, which follows on Dornbracht’s long-standing cultural commitment but takes an even more progressive approach, was planned as a continuous series. Four terms summarize the concept: “Exploration. Experiment. Experience. Engagement.” Thus, dialogue with the user and the participatory moment also play an important role in addition to the experimental-research character. 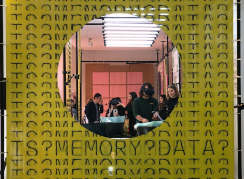 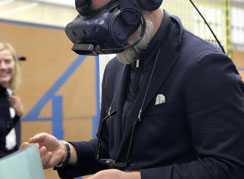 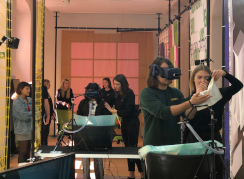 Opening in Milan: a journey into the future of the bathroom

How can new technologies transform, enrich or even replace the encounter with the element water? This question was the beginning of the first Dornbracht Research Lab.
The central exhibit was the VR-based installation “Hyper Fountain”: What appeared to be merely an improvised structure consisting of a simple plastic bucket and a water hose transformed into a futuristic scene when VR glasses were put on. The bucket turned into a marble basin, and the water hose into a Dornbracht supernova fitting.
In this virtual scenario, visitors were able to experiment with new, unexpected forms and manifestations of water. As water flowed from the hose over their hands, they experienced butterflies and spiders, liquid gold, coins, and other surreal textures in virtual reality.

Between reality and virtuality

“It was interesting for us to observe how the human brain resolves these contradictory stimuli,” explains Creative Director Mike Meiré, who initiated and designed the Dornbracht Research Lab. “Many visitors suddenly perceived things physically that were not there in reality, such as a tickling sensation of small spiders on the skin, or water flowing over their hands even after it had long since been turned off.”

In short interviews, participants were asked about their impressions following the experience.
Many found the immersion in virtual reality calming and reassuring, as if one could actually step out of everyday life temporarily. “I was much calmer afterwards, as if my pulse had gone down,” reported one visitor. Another visitor was almost euphoric.
“I felt happy the whole time. I couldn’t stop laughing. I wasn’t afraid at all, not even of the spiders.”

New perspectives for bath and spa

These observations open up a glimpse of what virtual reality might do for us in the future. “It is conceivable that we will be able to use virtual reality to significantly increase the effect of water and create experiences that appeal to our senses in a whole new way,” says Andreas Dornbracht. “If we can trigger sensory sensations without actually having to use water, this will also open up highly interesting perspectives for a more economical and sustainable use of this resource.”
Speaking in the context of interior design, Mike Meiré added: “Up to now we have had a limited repertoire of materials and textures at our disposal, like marble, stone and glass, for example. Although these can be reconfigured over and over again, there are natural limits to the freedom of design. In virtual reality, these limits don’t exist. Almost anything seems possible.”

From 29 August to 1 September 2019, the Dornbracht Research Lab will be continued as part of the Design Biennale Zurich. The installation is part of the group exhibition at the main location in Werkstadt Zürich, in the large manufacturing hall.

Aloys F. Dornbracht GmbH & Co. KG, with headquarters in Iserlohn, is a globally active, family-run manufacturer of high-quality designer fittings and accessories for bathroom/spa and kitchen.
The Dornbracht brand claim “Culturing Life” continues the years of discussion and debate about these environments and expands the company’s fundamental design and water expertise: technological innovation to promote connectivity and comfort, and the prevention of ill health through a focus on daily well-being, will increasingly characterise the company’s future brand orientation and product development. Dornbracht is forever designing – and cultivating – life anew. A long-running cultural commitment through the Culture Projects provides Dornbracht with an ongoing source of fresh inspiration, while advancing innovation and technology leadership in bathrooms and kitchens. The intelligent, open Smart Water system makes Dornbracht one of the first to transpose the opportunities and possibilities of digitalisation to these environments. Dornbracht is part of the Dornbracht Group that, along with Alape, brings together two premium bathroom and kitchen suppliers. Enthusiasm about innovative technologies and the highest quality of workmanship is simply part of everyday life for the more than 1,000 Group employees.