You are here: Home1 / Press2 / Southern Californian modernism in Berlin: the Triesch Residence with fittings...

Southern Californian modernism in Berlin: the Triesch Residence with fittings and shower solutions from Dornbracht

The wood and glass used in the Triesch Residence in the Berlin suburb of Kleinmachnow convey a sense of openness and freedom. This house is unmistakeable, just like the other buildings designed by Raymond “Ray” Kappe, one of the most important innovators of modern architecture. The Dornbracht fittings in the bathrooms and kitchen are an important element of the overall concept. 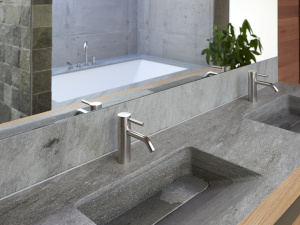 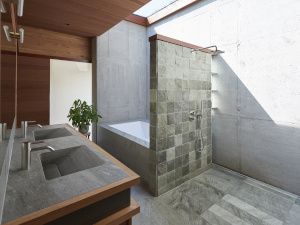 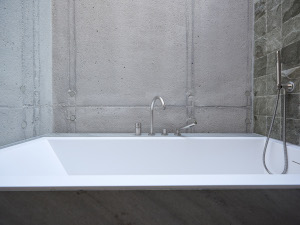 Dornbracht Meta accentuates the reduced design of the bathrooms
The Triesch Residence has all the features of a work by Ray Kappe: clean, horizontal lines and proportions, augmented by open rooms suffused in light. An architecture shaped by redwood timber and glass that extends seamlessly into the interior design of the home.

This also defines the three bathrooms, which prove to be interesting compositions of wood, glass and stone. On the first floor, polished Rauriser natural stone is used to tile the floors in the parents’ bathroom, as well as for the washstands. This brings out the best in the two Meta series fittings, which are particularly impressive in this setting. Their precise radii subtly accentuate the minimalist clarity of the interior design. The Platinum matt finishes harmonise gently with the elegant grey tone of the natural stone, intensifying the warm ambience created by the redwood timber.

The shower and bath are separated by a room divider covered in untreated tiles. Natural light falls directly from above into the spacious shower area, enabling a water experience that is fully in keeping with the underlying sense of freedom permeating the house. The Dornbracht rain shower mounted there matches the washstand fitting. There is another Dornbracht fitting on the other side of the room divider, on the rim of the bath. The geometric appearance of the curved spout contrasts delightfully with the rough texture of the natural stone tiles.

The children’s bathroom follows a similar design. A distinctive physical feature is the glass panel between ceiling and walls that separates the bathroom from the children’s room next door. An overhead shower from Dornbracht is placed on the tiled wall above the bath. There is another Meta in the guest bathroom, one floor down, and this single-lever basin mixer radiates modernity and personality. The Platinum matt finish once again accentuates the timeless and confidently stylish minimalism of the fitting.

Dornbracht Sync enhances the kitchen experience
In the kitchen, developer Lars Triesch opted for the Sync fitting with extending spout. The tapered transition between body and spout and the inner contour of the groove-free lever really catch the eye. The seemingly sculptural design in elegant Platinum matt is retained here, as well as in the bathrooms. Its dynamic, front-facing design language fits harmoniously into a building fabric that is open on all sides.

Lars Triesch on Dornbracht
“The purist beauty and sensuousness of the fittings speak for themselves. They have a compelling aesthetic appeal and are also excellent when it comes to functionality,” says Lars Triesch. “It was not for nothing that Ray Kappe himself was already relying on Dornbracht products in one of his last projects in Los Angeles. The incomparable quality meant that I did not have to think twice about following his lead.”

A piece of American design history in Germany
In 2017, Lars Triesch, the owner of “Original in Berlin”, a store selling modern furniture and selected design objects, reached out to Ray Kappe, who was 89 years old at the time. He asked the architect to build a home for his family in his own inimitable style: modern aesthetics, combined with an organic closeness to nature. The Triesch Residence, a green idyll surrounded by trees in Kleinmachnow on the southern edge of Berlin, took four years to complete.

Products from the manufacturer Dornbracht congenially complement the modern, yet nature-loving aesthetics that are a feature of this house, and all the other works of Ray Kappe. Unfortunately, the visionary architect was not able to witness the completion of the building for himself, as he died at the age of 92, in 2019. Sons Ron and Finn Kappe and their team finished the Triesch Residence that became his legacy: a piece of American design history in Germany, an impression of California in Brandenburg.

LISSÉ blends harmoniously with its surroundings i

LISSÉ is remarkable for its intuitive operating m

Today we take a closer look at the bathrooms of @b

@bridgehousela: Thoughtfully Responsive to the Env

Extremely hygienic thanks to its touchless design

Let us have a look at the @hotelseegarten⁠ ⁠ A

Hill and Dale⁠ ⁠ "As a foundation of any of ou

Where city meets nature⁠ ⁠ Hill and Dale is an