The Vaia series of fittings: elegant yet progressive design, inspired by the “Transitional Style” interior trend

The story: Dornbracht is continuing the “Create a new balance – between traditional elegance and contemporary cool” project accompanyig the Vaia launch with two new collaborations. 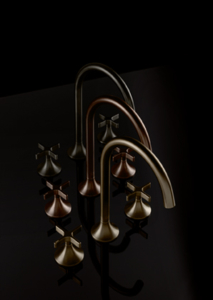 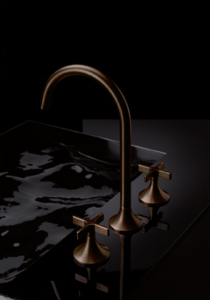 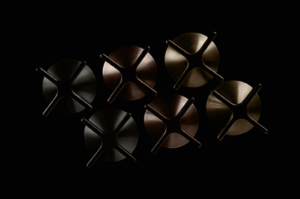 Iserlohn/Milan, April 2018
Dornbracht is presenting a new colour collection for Vaia at this year’s Salone del Mobile. The series of fittings designed by Sieger Design is inspired by Transitional Style and is distinguished by its elegant yet progressive design. Chrome and Platinum are supplemented by three dark, silky-matt finishes –
Dark Platinum matt, Dark Bronze matt and Dark Brass matt – which round off this surface portfolio for VAIA.

The new finishes are characterised by their dark, silky-matt shades and their slight brushstroke texture. Warm, soft and earthy, they embody a sense of originality and cosiness, thereby creating highlights in the bathroom which are equally archaic and contemporary. Apart from the actual design, colour becomes a further creative dimension. These Dornbracht finishes provide momentum and inspiration as well as creating more freedom of design. Dark Platinum matt is already available while Dark Brass matt and Dark Bronze matt will be available as of August 2018.

Unique depth and sheen
The quality of Dornbracht finshes is the result of a combination of technological expertise, exclusive craftmanship, the use of raw materials of the highest quality, and uncompromising quality control. The new colour collection sees Dornbracht applying its high level of competence in the area of finishes as well as its specially-developed manufacturing process in preliminary treatment thereof, whereby the special feature involves the sequence of processing steps and a unique matting method. The result: The new Dark Platinum matt, Dark Bronze matt and Dark Brass matt finishes are distinguished by a unique depth and sheen.

“Create a new balance”: New collaborations
By introducing the new colour collection, Dornbracht is continuing the “Create a new balance – between traditional elegance and contemporary cool” project started in 2017 when the Vaia series of fittings was first launched. The first collaboration partners, architects Rafael de Cárdenas and Neri&Hu, presented their visions of a Transitional Style bathroom in the form of mood boards, material collages and architectural drafts. Collaboration partners this year are the interior designer Lex de Gooijer (Rotterdam) and the architectural and design duo Irina Kromayer and Etienne Descloux (Berlin).

Based on the new finishes for Vaia, they present bathroom ideas which take the Transitional Style a step further. Transitional Style describes a mix of traditional and contemporary elements. Notable for its experimental use of materials, textures, forms and colours, it epitomises a world of style that combines the new and the established and brings the different influences of interior design into balance.

Lex de Gooijer, Irina Kromayer and Etienne Descloux approached the Transitional Style in sketches, drafts, photo and material studies, each incorporating their own individual perspectives: while de Gooijer, the architect, went “from the outside in” and drew inspiration from the exclusive “New Orleans Tower” in his home city of Rotterdam, interior designers Irina Kromayer and Etienne Descloux took the actual fitting itself as a starting point for the creative process. Within the framework of a material excursion, they initially positioned Vaia in the new Dark Bronze matt finish in various urban environments and then used their observations to derive their bathroom concept. The drafts and ideas presented by de Gooijer as well as Kromayer and Descloux formed the basis for the material collages and bathroom architectures which then ensued for Dornbracht (Creative Direction: Mike Meiré).

Lex de Gooijer, Rotterdam
Dutch-born Lex de Gooijer, a graduate of the renowned Willem de Kooning Academie, defines himself as a comprehensively thinking interior designer who acts within the respective context and who always seeks harmony in his designs. De Gooijer primarily draws his inspiration from nature and its uniqueness when approaching the “Create a new balance” project. Natural stone in different colours, combined with oak floors in herringbone patterns, form the surroundings for Vaia in Dark Brass matt in his draft. “The look is lush, yet for all its sophistication, it stays humble”, claims Lex de Gooijer.

He opted for two different types of marble: “Wave Marble” which is distinguished by its organic, wave-like texture, and “Four Seasons Marble” which reveals an expressive grain. For de Gooijer, they represent the perfect embodiment of timelessness so characteristic of the Transitional Style. “Nature creates the most amazing aesthetics, which are above any trend”, explains de Gooijer. He also pairs these natural elements with elegant bronze objects and details inspired by art déco which are reminiscent of the cosmopolitan-classic look of a grand hotel.

De Gooijer derived the geometric architecture of his bathroom design exclusively based on cuboids from the layout of a building for which he has a particular fascination: the “New Orleans Tower” designed by Álvaro Siza Vieira which characterises the skyline of Rotterdam. He found this to be the ideal inspiration for lending his designs an international, urban character. At the same time, he was fascinated by the location of the building at the harbour. The ensuing interaction between architecture and water is reflected in his bathroom design in the texture of “Wave Marble”.

Irina Kromayer and Etienne Descloux, Berlin
The Berlin-based interior designer Irina Kromayer and the Swiss architect Etienne Descloux often collaborate on specific projects. The duo pursues the claim of creating timeless yet unconventional interior design. Descloux and Kromayer regard Transitional Style as the trend by a society querying learned traditions and forms. “In preoccupying ourselves with Vaia, we wanted to break with traditional patterns”, adds Kromayer.

This gave rise to the idea of positioning VAIA in Dark Bronze matt in various urban contexts. Within the framework of a material excursion, Kromayer and Descloux noted the effect of the fitting, its colours and material in the respective environment. “We discovered that Vaia has outstanding ‘chameleon’ characteristics – especially through the colour provided by the Dark Bronze matt finish.”

It was important for both of them to create a tangible and realistic context for Vaia. Accordingly, a modular screen system acting as a flexible room partition forms the basis of their urban bathroom. “It could be equally at home in a loft or in a one-room apartment”, explains Irina Kromayer.