You are here: Home1 / Press2 / Dornbracht exclusive in “The Langham Nymphenburg Residence”

As part of a project to restore its Langham Nymphenburg residence in Munich, the renowned porcelain manufacturer Nymphenburg teamed up with Dornbracht, the leading German manufacturer of high-quality fittings and accessories for bathrooms, spas and kitchens, to furnish the bathrooms of the residence. Guests will be able to enjoy interiors designed by Mang Mauritz Architecture & Interior Design that feature brand-name products of the highest quality. The cooperation with Dornbracht came about as part of the two companies’ membership of the “Meisterkreis”, which fosters collaborative projects involving the best talents in terms of creativity and quality across a wide range of industries. Dornbracht’s iconic design and choice of materials and finishes, as well as the quality of its workmanship and production, made it an ideal partner for the porcelain manufacturer. 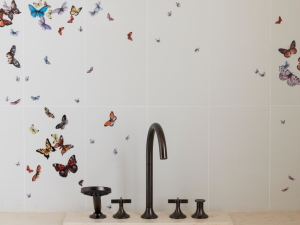 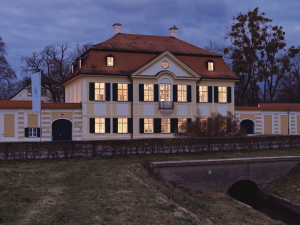 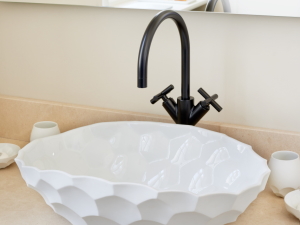 The timelessness of Dornbracht’s iconic forms
Each of the seven bathrooms in the residence is dedicated to a specific theme and tells its own story: in one room guests are the stars in a circus ring, in another they find themselves in a cloud bath. The carefully selected Dornbracht products reflect the style of the residence’s architecture and give each bathroom its own individual character. The luxurious quality of the furnishings is complemented by Dornbracht’s Tara, Vaia, Meta and CL.1 design series in gold, chrome and matt dark platinum finishes. While Tara complements the safari theme in matt black, Vaia in matt dark platinum blends perfectly into the butterfly setting. The golden Tara emphasises the flair of the Master Suite, which reflects Bavaria’s royal past in detailed depictions of Bavarian castles such as Neuschwanstein, Hohenschwangau and Herrenchiemsee.

Dornbracht’s design series fit perfectly into the architecture of the residence thanks to their timeless and long-lasting quality that outlasts epochs, styles and trends. At the same time, the clear lines of the Dornbracht icons form a contrast to the opulent, playful interior design of the house. The examples of Tara and CL.1 make it particularly clear what the combined essence of all Dornbracht design series is: the different shapes are united by their strong individual character which allow them to blend effortlessly into their surroundings.

Tara as an interpretation of an archetype, CL.1 for extravagant accents
The Tara series merges traditional form with timeless modernity. Inspired by the Bauhaus school, it is an interpretation of an archetype that generations of people have been familiar with. With its characteristic cross handles, the fitting transforms the bathroom into an aesthetically designed living space. Unusual finishes, such as brushed brass coated with 23-carat gold, give it a luxurious look that integrates perfectly into the overall appearance of the residence. The progressive CL.1 is an icon of a new age. Dynamic, sculptural and ultra-modern, it gives the rooms an extravagant touch. A variety of handles and finishes make CL.1 particularly easy to tailor to individual tastes.

Where traditional craftsmanship intersects with innovative technology.
High-quality designer fittings, made in Germany – it is this combination that has distinguished Dornbracht’s products and solutions for many decades. Even in this age of technological and digital transformation, many production steps in the Iserlohn factory are still carried out by hand. At the same time, Dornbracht plays a decisive role in the development of living spaces such as bathrooms, spas and kitchens. This explains why Dornbracht and Porzellanmanufaktur Nymphenburg, a company with a long-standing tradition, harmonise so well with each other.

For more information, please visit: https://www.dornbracht.com
Press and image material (©The Langham Nymphenburg Residence) can be found via the following link: http://media.dornbrachtgroup.com/WorldPort/public/XY3CUn3E

A bathroom faucet of timeless design⁠ ⁠ For th