The fourth generation at Aloys F. Dornbracht GmbH & Co. KG has arrived in the company. Matthias and Andreas Dornbracht’s two sons, Konstantin and Alexander Dornbracht, are assuming initial responsibility in managerial positions. The family company took ISH in Frankfurt as an opportunity to present the new faces to the trade press at an informal meeting. 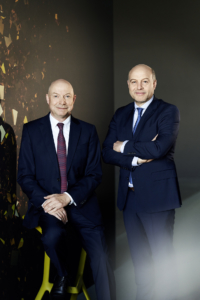 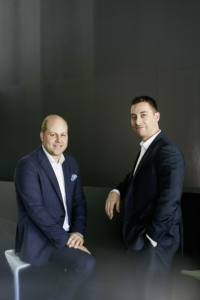 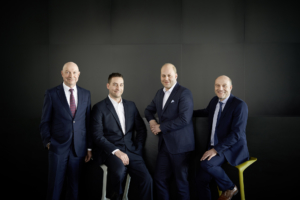 For several years, the two current Managing Partners Andreas (59) and Matthias Dornbracht (57) have been thinking about the future development of the Dornbracht Group companies, including not only Dornbracht but also the Alape subsidiary in Goslar. Questions also arose about the future assumption of responsibility in the family company founded by grandfather Aloys and father Helmut in 1950.

“We were both extremely lucky to experience a smooth transition from the second to the third generation. Our father was extremely conscientious and started the whole process early on, first ensuring that we had the necessary qualifications and then letting us get to know the company”, explains Andreas Dornbracht. And Matthias Dornbracht adds: “This experience showed us that the transfer of entrepreneurial responsibility is a process that takes several years. Which makes us all the happier that the fourth generation is already interested in actively participating in the company.”

Konstantin Dornbracht (32) completed his Bachelor of Engineering training in 2012, followed by gaining initial experience of being in charge, which included the role of technology manager for a tool manufacturing company. Since autumn 2017, he has worked at the Iserlohn headquarters of the family company, firstly as Plating Shop Manager and then as Purchasing Manager. He has held his current position of responsibility for the entire Operations division since 1 March. Integral process control for production at the Iserlohn site is his focus.

After his Bachelor of Science in CRM (Customer Relationship Management) & Marketing in 2013, Alexander Dornbracht (33) acquired his MBA in International Marketing & Supply Chain Management at the University of San Diego. After various marketing jobs, where he finally achieved initial success as a Senior Digital Marketing Manager, he has been available to the company since September 2018 as Vice President Marketing in the Dornbracht Americas branch office in Atlanta, USA. He will press ahead with the digitalisation process in the Dornbracht Group and focus on performance marketing.

As well as their actual areas of responsibility, they will both be increasing their entrepreneurial skills, to gradually widen their range of experience and sphere of activity.

The time, the professional focus and the organisational structure for both Konstantin and Alexander to grow into the role of responsible managing directors will become clear as the years progress”, explains Andreas Dornbracht. Matthias Dornbracht explains how he and his brother see their own future role: “In due course, we will use our years of experience as entrepreneurial driving forces to push special issues and also take on special assignments.”