Aloys F. Dornbracht GmbH & Co. KG becomes Dornbracht AG & Co. KG. Dornbracht is paving the way for expanding its competitiveness on the global market with the financial involvement of an external entrepreneurial family and new management. In doing so, the company is strengthening its position as an international design leader in the sanitary industry. 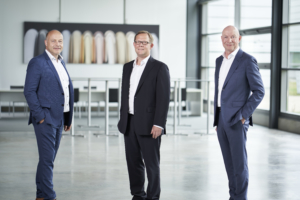 The participation of the entrepreneurial family Knauf from Dortmund, Germany, as strategic investor and majority owner in the newly formed Dornbracht AG & Co. KG is about to be concluded. Winfried Tillmann, spokesperson for the Knauf Family Office: ‘We are delighted to be able to ensure the sustained and accelerated growth of the company in the capacity of long-term investor and future co-shareholder.’

Matthias Dornbracht adds: ‘With the Knauf family, a financially strong and long-established investor will join the company – a partner who thinks and acts globally, is from the region, knows the culture of a family company and will maintain its entrepreneurial independence.’

In the course of this change, Andreas and Matthias Dornbracht will hand over leadership to the new Chairman of the Board, Stefan Gesing (42), who was most recently CFO and member of the Board of Management at Grohe AG, and before that CFO at thyssenkrupp Industrial Solutions.

‘Stefan Gesing has relevant experience in successfully transforming companies, he is a prudent manager, and he identifies with the family company’s DNA,’ says Andreas Dornbracht.

Matthias Dornbracht (59) will be Chairman of the Supervisory Board of Dornbracht AG & Co. KG, and with his family will remain one of the main shareholders. Andreas Dornbracht (61) will leave the company to devote himself to new projects with his investment company. Following the successful entry of the fourth generation in 2018, the founding family continues to hold leading positions with Alexander Dornbracht (34) and Konstantin Dornbracht (33).

Stefan Gesing, future Chairman of the Board of Dornbracht AG & Co. KG and co-shareholder, is looking forward to the new task. ‘The Dornbracht brand is excellently positioned in the international premium and luxury segment, and embodies design and innovative leadership. My task will be to develop the newly-formed Dornbracht AG & Co. KG from this solid foundation. The aim is to make the fascination of the brand tangible and to further strengthen the company’s quality standards and manufacturing competence.’

We are Dornbracht. With our products and ideas, we want to contribute to improving your quality of life.
#LeadingDesignsForArchitecture
#dornbracht

Let's take a look at META's new finishes and color

You voted, we listened.⁠ ⁠ META in Orange meet

What do you think of when you see marble?⁠ ⁠ D

What do you think of this combination?⁠ ⁠ You

Minimalist, versatile and durable The minimalist

A design statement for individual bathrooms​⁠

Minimalist, versatile and durable​⁠ ⁠ ​The