You are here: Home1 / Press2 / Dornbracht at ISH 2019: individuality and sensuousness for bathroom and...

Dornbracht at ISH 2019: individuality and sensuousness for bathroom and spa

Attention US media:
Aquamoon and AquamoonATT are not available in the United States of America. 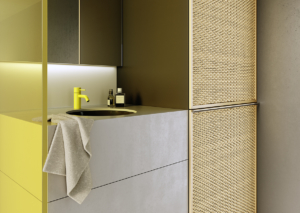 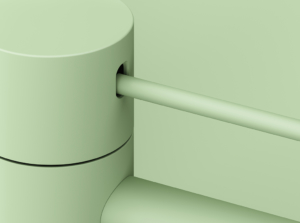 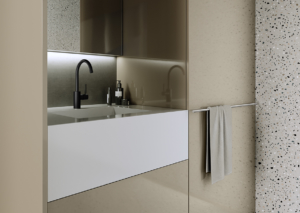 At ISH, the leading international trade fair, Dornbracht is showcasing new products for bathroom and spa that take up the megatrends of “Individualisation” and “Healthness”. The refinement of the Meta fittings series therefore features a new design concept: “reframing minimalism”, which combines stylish minimalism with individuality. Dornbracht is also presenting unique Signature Treatments with the multi-sensory shower AquamoonATT: automatic choreographies of water, flow modes, light and fragrance – for that individual moment of bliss.

“Your own home should not just be an expression of your personality, it should also encourage a health-conscious lifestyle”, says Andreas Dornbracht, Managing Partner of the family company. This year’s new products are also based on this aspiration. “Along with minimalist design and curated collections of finishes, the further development of Meta brings new and individual design options to the bathroom. AquamoonATT, with its specifically developed Signature Treatments, is the epitome of a sensuous shower experience that acts on body and soul. As visionaries in our industry, we pursue holistic bathroom and spa solutions that are both adapted to and enhance the daily rituals of each individual.”

Refinement of the Meta series of fittings: minimalism meets individuality

Clear lines and inherent shape: Meta has always embodied contemporary minimalism. The central design element of the series is the basic geometric shape of a cylinder that has been immaculately perfected.
The refinement of the Meta series is defined as “Reframing Minimalism” by a new design concept, consisting of Meta, Meta slim and Meta pure – a further development of the classical reduction that is a feature of minimalism. The design language is taken back as far as it will go to meet the key longings of our age, leaving room for the second level of design: the use of colour and finishes. With three carefully curated collections of finishes – Fashion, Urban and Architectural – Dornbracht creates a new and individual design variety for bathroom and spa applications.

With AquamoonATT, Dornbracht raises the “healthness idea” from the LifeSpa concept to the next level.
The effect of water on your body is enhanced by mental participation, so that it meets the need for holistic well-being and slowing down. Dornbracht’s AquamoonATT appeared as a concept study at ISH 2017, with a smart control concept developed in-house by Dornbracht and called the Ambiance Tuning Technique (ATT). This can be used to call up the so-called Signature Treatments of “Soothe“, „Nurture“ and „Empower”, unique choreographies of water, flow modes, mood lighting and fragrance, simply by tapping a touch-screen. According to designer Michael Neumayr, the harmonious interplay of the elements can evoke “a moment of bliss” – a feeling of happiness that brings to mind sensations such as relaxation, revitalisation and security.

Details of all Dornbracht’s new products can be found in the respective press releases.

Innovative design products for kitchen, spa & bathroom made in Germany. To get featured, mention & tag #dornbracht.

From classic to playful – discover The Architect

Congratulations @fabianfreytag on receiving the "I

Wake up with water therapy. Hydrotherapy, or water

The grand dame of the bathroom. MADISON redefines

The META 2 mixer, spout and rinser can be arranged

META is minimalism in its purest form. Discover fi