The picturesque boutique hotel Can Bordoy Grand House & Garden in the old town of Palma de Mallorca offers guests a wellness experience in the finest Mallorcan style. Designed by the award-winning architecture studio Ohlab, the property is an inviting combination of typical Mallorcan architecture and cosmopolitan chic, along with five-star superior service offers a stylish escape. Dornbracht has equipped the hotel’s spa and wellness area with the Horizontal ShowerATT and each bathroom with Tara. premium fittings to complete the luxurious experience. 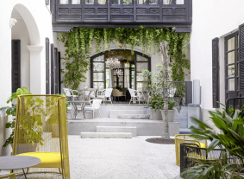 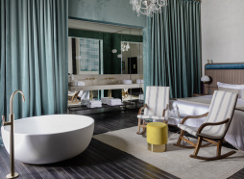 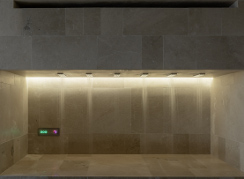 City oasis with a pinch of extravagance

Located in the lively La Lonja district, the Can Bordoy is a small paradise comprised of rooms behind the ornate walls of a historic palace. The green inner courtyard enchants with a pool surrounded by old trees and modern loungers. The minimalist bathrooms feature the Tara. series in brushed brass – a wall-mounted washbasin mixer and a free-standing single-lever mixer for the bathtub. For those seeking an escape, the spa and wellness facilities include double massage cabins, a whirlpool, a special Ayurvedic treatment room and Dornbracht’s Horizontal ShowerATT.

The first of its kind, the Horizontal ShowerATT allows users to have a personalized shower experience while reclining. The innovative massage shower brings a new feeling of relaxation – tension melts away, everyday stress disappears with the water, and the body and mind feel noticeably revitalised. The Horizontal ShowerATT combines six water bars recessed above a flat surface with an eTOOL as the central control element. Similar to a massage, three pre-programmed choreographies deliver a balancing, energizing or de-stressing experience.

Aloys F. Dornbracht GmbH & Co. KG, with headquarters in Iserlohn, is a globally active, family-run manufacturer of high-quality designer fittings and accessories for bathroom/spa and kitchen. The Dornbracht brand claim “Culturing Life” continues the years of discussion and debate about these environments and expands the company’s fundamental design and water expertise: technological innovation to promote connectivity and comfort, and the prevention of ill health through a focus on daily well-being, will increasingly characterise the company’s future brand orientation and product development. Dornbracht is forever designing – and cultivating – life anew. A long-running cultural commitment through the Culture Projects provides Dornbracht with an ongoing source of fresh inspiration, while advancing innovation and technology leadership in bathrooms and kitchens. The intelligent, open Smart Water system makes Dornbracht one of the first to transpose the opportunities and possibilities of digitalisation to these environments. Dornbracht is part of the Dornbracht Group that, along with Alape, brings together two premium bathroom and kitchen suppliers. Enthusiasm about innovative technologies and manufacturing quality at the highest level is experienced on a day-to-day basis in the group, which has more than 1,000 employees.