You are here: Home1 / Press2 / Britannia Hotel: Dornbracht fittings embody the timeless elegance of the...

Britannia Hotel Trondheim: Dornbracht fittings embody the timeless elegance of the turn of the century

The Britannia Hotel is internationally renowned for its traditional British style and exclusive 5-star service. Founded in 1870, it has played an important role in Trondheim’s history: Many famous persons have been its guests, including members of the Norwegian royal family and other international dignitaries. In April 2019, after three years of renovation, it opened its doors to a new generation of visitors. The hotel has been equipped with Madison and VAIA fittings from Dornbracht, which reflect the classic and sophisticated style of the house in a unique way. 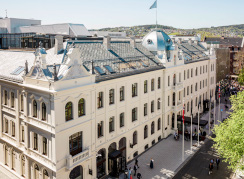 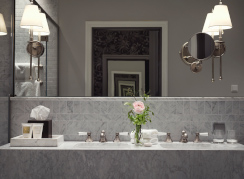 Due to its bright white period facade, the Britannia Hotel is also known as the “White Swan” of Trondheim, and is therefore a prominent meeting place for visitors from all over the world. Situated on Dronningens Street in the historic city center close to Nidaros Cathedral and the wide Trondheim Fjord, it has been in its present form since the 19th century, when some structural changes were made.

Bathroom architecture between tradition and modernity

In order to make the Britannia a remarkable 5-star hotel that captivates its guests with modern comfort and sophisticated hospitality, focus was placed on making the bathroom décor and furnishing especially exquisite. Dornbracht was chosen to accomplish this: All of the hotel’s public restrooms and all of its 257 rooms are equipped with Dornbracht products. For example, the luxurious hotel rooms feature fittings from the Madison series with “Dark Brass matt” and “Dark Platinum matt” finishes. In the public restrooms, there are touchless VAIA fittings with a “brass” finish. In addition, Dornbracht’s xTra-Service was commissioned to produce matching toilet paper holders, bidets, hand wash fittings, shower mixers and a siphon for people with disabilities.

The Madison fitting is a journey through time to the last millennium – to New York of the 1920s to be more precise. Its design is a reflection of the classic fittings in the bathrooms of great luxury hotels such as The Carlton and Waldorf Astoria. Hollywood stars staying in such noble accommodations filled their bath tubs with a similar fitting. Hence, when guests touch the eye-catching handles, they are also touching a bit of history. At the Britannia Hotel, Madison was chosen as a tribute to the style of cosmopolitan hotel interiors. Their glamorous and elegant appearance is superbly accentuated by the contrast with white and gray marble.

VAIA: Elegantly progressive design for a new iconography of modernity.

Inspired by the interior trend Transitional Style, Vaia embodies a soft, balanced design language: Its filigree spout adopts a classic shape and transforms it into a new, open silhouette. Installed throughout the Britannia Hotel, VAIA touchless fittings are also available in a classic look, and with both cross and lever type handles combining geometric and soft contours. In addition, conical rosettes create a particularly gentle transition to the vanity. In this way, VAIA blends into both traditional and modern bathroom architectures, and any other Transitional Style architectures that combine elements from different styles.

Aloys F. Dornbracht GmbH & Co. KG, with headquarters in Iserlohn, is a globally active, family-run manufacturer of high-quality designer fittings and accessories for bathroom/spa and kitchen. The Dornbracht brand claim “Culturing Life” continues the years of discussion and debate about these environments and expands the company’s fundamental design and water expertise: technological innovation to promote connectivity and comfort, and the prevention of ill health through a focus on
daily well-being, will increasingly characterise the company’s future brand orientation and product development. Dornbracht is forever designing – and cultivating – life anew. A long-running cultural commitment through the Culture Projects provides Dornbracht with an ongoing source of fresh inspiration, while advancing innovation and technology leadership in bathrooms and kitchens. The intelligent, open Smart Water system makes Dornbracht one of the first to transpose the opportunities and possibilities of digitalisation to these environments. Dornbracht is part of the Dornbracht Group that, along with Alape, brings together two premium bathroom and kitchen suppliers. Enthusiasm about innovative technologies and the highest quality of workmanship is simply part of everyday life for the more than 1,000 Group employees.