Beautiful spacious villa dates back to the Gustavian era.

The assignment was to create a modern home with feeling, a house to feel welcome in. The wooden house, located in a large green area just outside Stockholm, was renovated and expanded through several rounds.

Though it is unclear how old the house really is, the original structure was considerably smaller. It began as a small timbered rectory croft that was moved to its current location in 1785 to become part of a magnificent park. The old timber walls are still hidden behind slab cladding today, also 2 tiled stoves from the 18th century and their flues are preserved. The largest rebuilding of the house was done around 1920, when a large part of the building to the east was added and another floor was added to the existing house, thus more than doubling the area. In 1943, another major extension took place.

In the summer of 2018, our client, a private family, bought the house. It had then been uninhabited for many years. All surface layers, both inside and outside, needed to be overhauled. All technical systems such as water and sewage, electricity and ventilation needed to be replaced.On the entrance level, several walls were taken down so that the floor plan opens up and the stairs to the upper floor were made a visible element. The connection between kitchen, living room and dining room is now completely open. New patio doors with glass replaced small windows in the living room to let in more light. A large glazed double door from the dining room onto the patio was added, which replaced a window. A new large fireplace with inspiration from history became a central point in the social areas. 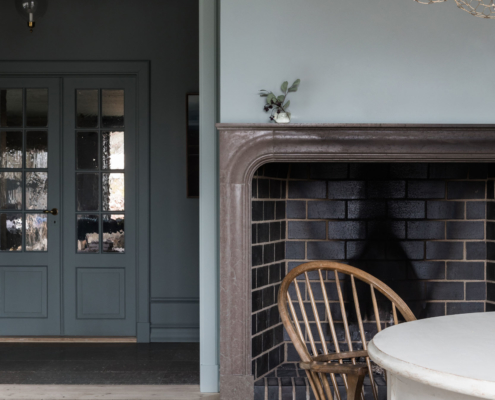 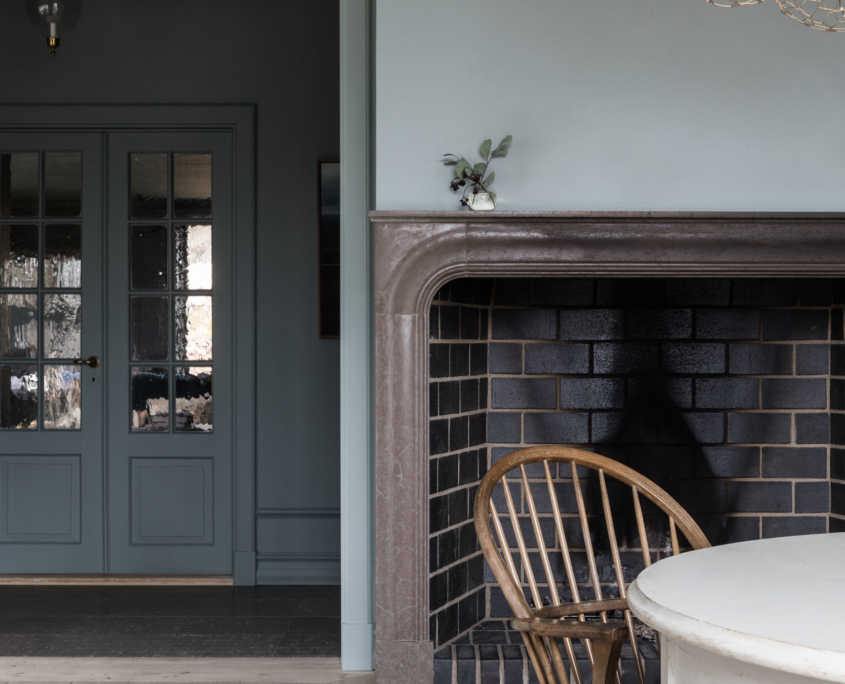 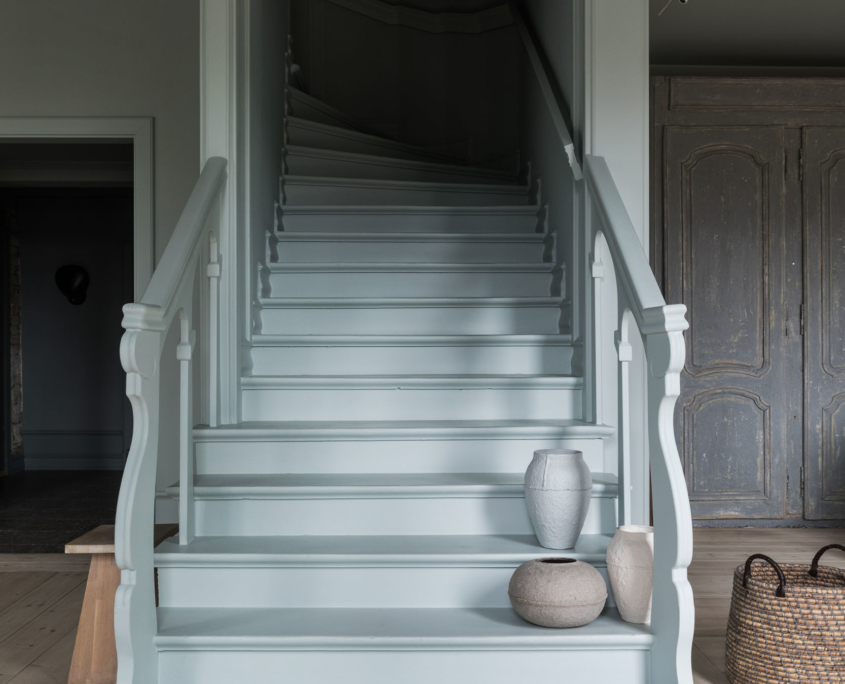 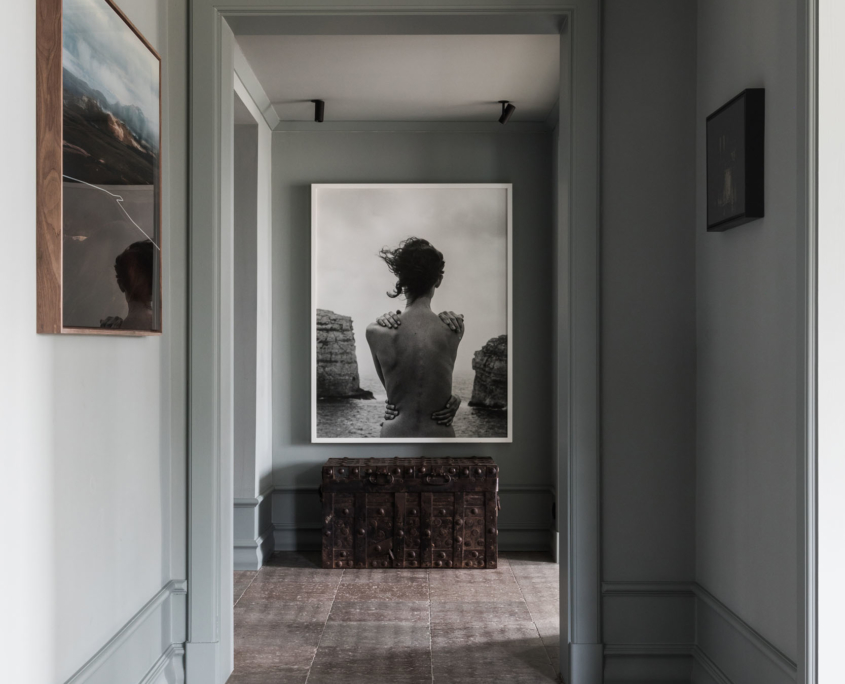 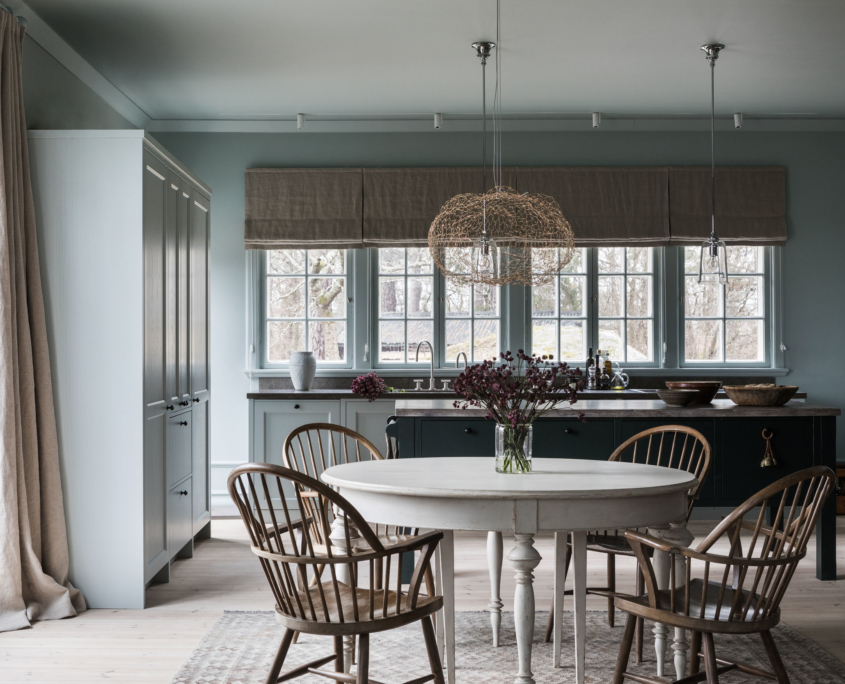 The family also gave clear instructions that it should be no luxury renovation. Old floors were preserved where we could, they were sanded and soaped. Old wooden roofs were picked out and made visible where possible. The new materials we chose to use are Swedish and rooted in the house’s history. On the floors are pine deck from the Swedish forests and limestone from Öland, materials used earlier in the 18th century. The color scheme has been done with inspiration from the Gustavian color scale, and cool blue-green color with different saturation in the different rooms. Rooms with low ceilings and bedrooms have been given a stronger / darker color, the open social areas and a lighter tone. We chose to paint everything in the same color such as walls, carpentry and ceiling, in each room. This gives the home a modern, calm and harmonious expression. 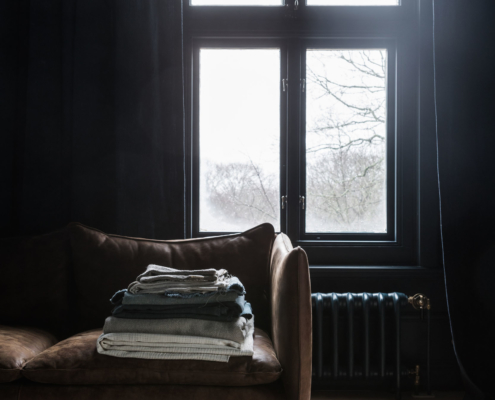 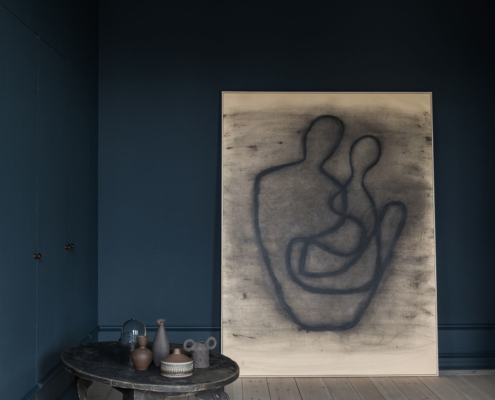 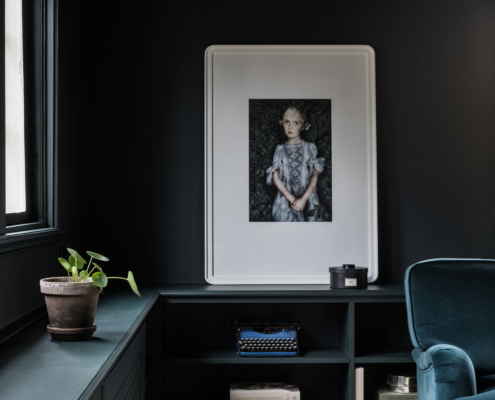 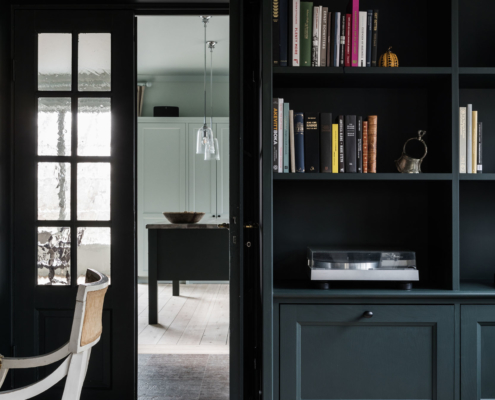 Installations should be simple and clear, seen as additions, as set furniture. The feeling is low-tech rather than high tech. In the guest toilet, an old sideboard was bought at auction, which was then rebuilt into a sink bench, with a top mounted sink and a spout with a knob. In two of the guest bedrooms, small bureaus were also bought at auctions, which were then rebuilt and supplemented with sinks and water pipes. The master suite has a bedroom and bathroom integrated, no walls that divide the two functions. The bathtub stands in the middle of the floor centered in front of a window with a beautiful free-standing bathtub spout. The location of the bathtub was a challenge technically, but with a “tub” hidden under the wooden floor under the bathtub, with a moisture alarm installed in it, which restricts water supply and drainage in case of moisture indication, there is the security.

The shower and the double sink stand on opposite sides of the masonry, also completely free in the room. The family had in previous homes products from Dornbracht installed, so when we as architects proposed the Tara series, it was just right. Over the years, we have worked with Dornbracht products in several projects in Sweden and are well aware of the product range and the opportunities that exist to influence the design. In this project, a special pipe was developed which is a combination of Tara and Vaia.

Inspired by Bauhaus style, TARA is a classic bathr

Discover the numerous possibilities with finishes

META – an expression of personality and attitude

White bathroom inspiration with The Architectural

Create balance and serenity in your bathroom space

Confident. Elemental. Pure. MEM does not need much

Enjoy the feeling of a natural rain shower with ad