How can new technologies transform, enhance or even replace the encounter with the element of water? This was the question we asked ourselves at Fuorisalone in Milan. In the context of an immersive virtual reality installation, visitors could discover water as an interface between an individual and technology, between the real and virtual experience.

For more than 50 years, the Milan furniture and design fair Salone Internazionale del Mobile di Milano  has been one of the most important exhibitions worldwide for interior fittings and design – and we have long been a regular presence there too, of course. This year, at Fuorisalone , the trade fair’s programme of off-site events taking place from 9 to 14 April 2019, we brought to life the virtual reality installation designed by Mike Meiré  and realised in collaboration with Elastique  –“Is Memory Data?” – as the first project of the “Dornbracht Research Lab”. 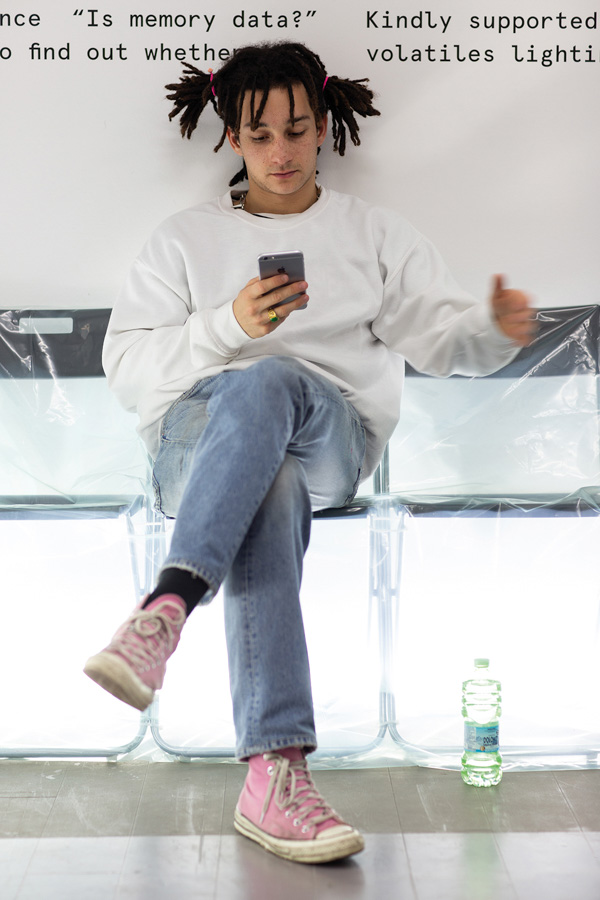 An open and unbiased format makes an exciting début

The new lab format wants to adopt an iterative and searching approach. Consciously open and unbiased, it devotes itself to questions associated with the long-term vision of our brand: creating water experiences that move individuals at an elementary level. It therefore ties in with our long-term debate and discussion about water, rituals and culture in the bathroom within the Dornbracht Culture Projects .

“The Culture Projects took us to new questions about the bathroom”, says Managing Partner Andreas Dornbracht. “Our engagement with rituals increasingly put the focus on the question of how water applications can contribute to well-being. Accordingly, we have developed many applications in recent years that present relevant additional values, the need for which could never have been predicted 25 years ago.”

“Hyper fountain” was an installation based on virtual reality that took centre stage in the initial Research Lab project “Is Memory Data?”.  Using VR goggles, visitors immersed themselves in a world of hyper-reality, where they could experience space, matter and in particular the element of water, in an unprecedented and playful way. The installation’s subversive approach matched the experimental character of the Research Lab, the digitally enhanced virtual world enjoyed a playfully tense relationship with the setting for the experience, that was generated by simple means.

Something that in reality was just a makeshift structure consisting of a single plastic bucket and a piece of garden hose, appeared as futuristic, polished computer-generated scenery in the virtual world. The bucket was transformed into a marble basin, the hose into a Supernova fitting . A radical contrast that left you in no doubt about the fragile boundary between the virtual world and the real world.

New and unexpected manifestations of water

In this scenario, visitors could experiment with water in new and unexpected guises and manifestations within the virtual realm. “You feel the water running over your hands, whereas your eyes are experiencing things rather differently”, explains Mike Meiré. The thinking behind what initially seemed a somewhat puzzling project title “Is Memory Data?” also becomes apparent at this point. “The title plays on the fundamental questions we asked ourselves during the process.” 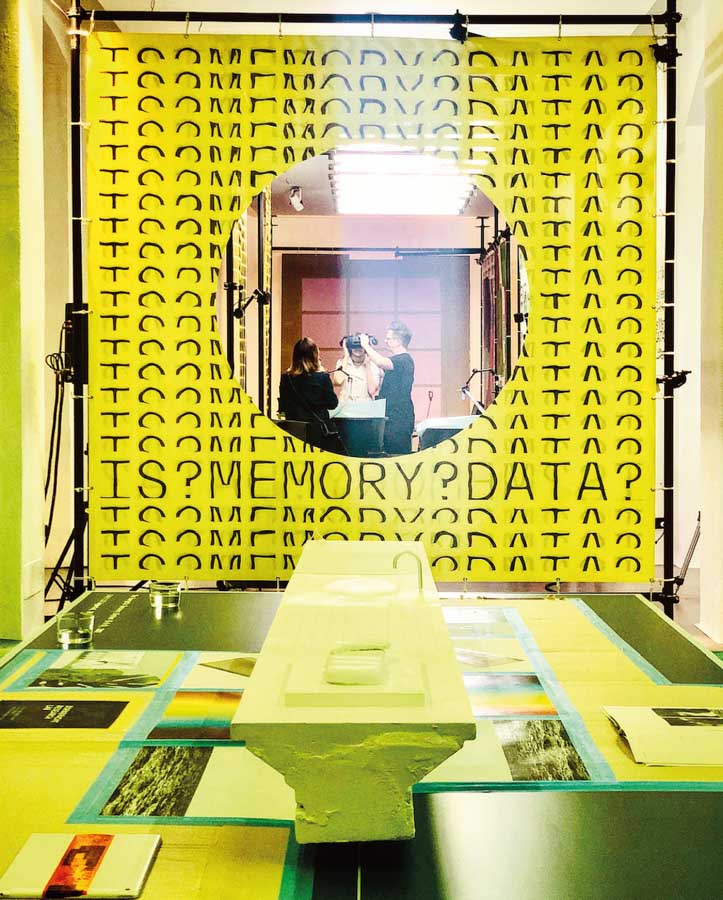 How can learned patterns of experience be changed?

“Can a virtual experience bring about the same reaction in us as actually, physically experiencing something? Are experiences basically data that we can create, reproduce and ultimately also manipulate?” Based on these questions, we became interested in whether and how learned patterns of experience could be changed and how we could re-condition our perception.

In addition to this, two former “Culture Projects” were re-interpreted and brought to life at Fuorisalone. The first to undergo a virtual reality update and put its contemporary relevance to the test was “Noises for Ritual Architecture” from 2008. Just like the new “Hyper Fountain” installation, the soundscapes initiated by Mike Meiré and composed by Carlo Peters already reflected the relationship between space, materiality and movement. The answers Meiré and Peters found to the question “What would ritual architecture sound like if it were to consist of sounds?” sought to dematerialise the space by transforming it into sounds and animated graphics. Even after more than ten years, the application of the latest technology makes it possible for “Noises for Ritual Architecture” to plunge into and add new dimensions to space and experience.

The second installation to be given a new setting was Mike Meiré’s “E-R-S Energetic Recovery System”, from 2002 in Milan. Originally a pipeline for cleansing awareness, “E-R-S” was now reactivated as duplicated augmented reality: cross-referencing the principle of cleansing as process and ritual and the potential of water to alter awareness. The installation is a ritual architecture utopia that gives a linear structure to human actions and can be compared to the process in a car wash. Body and mind are cleared and freed to create opportunities for experience. What is hidden in the depths of my being? What resources are available to me there? This journey allows the real and virtual worlds to co-exist and salvages the vision that a personal “redesign” is possible.

As already stated, the new “Lab” format takes a similar approach to the Culture Projects – the “only” difference being that the questions we are asking today are far more complex”, says Andreas Dornbracht. As development cycles get ever shorter, market research in this form can only function and produce results quickly enough if you work on topics iteratively and across disciplines. 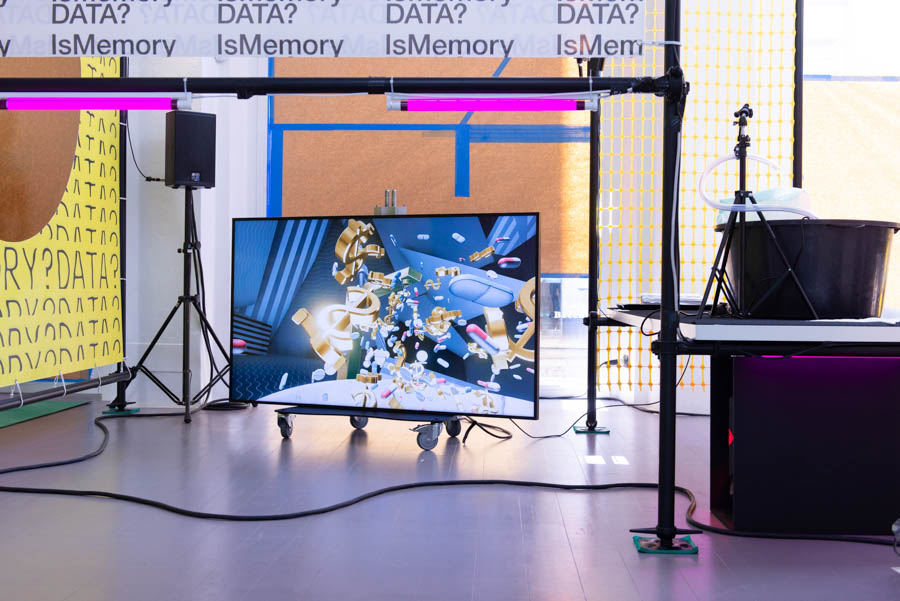 Can virtual reality help us to save water?

Andreas Dornbracht gives his views on what it means for the bathroom when experiencing something virtually replaces, or at least enhances the physical experience. “Let us take the pragmatic view: we are currently using water not just for cleansing, but also for our well-being and for preventive applications, so it is quite conceivable that virtual experiences can help to significantly increase and enhance the effect of water in future – as well as encouraging much more efficient water consumption.”